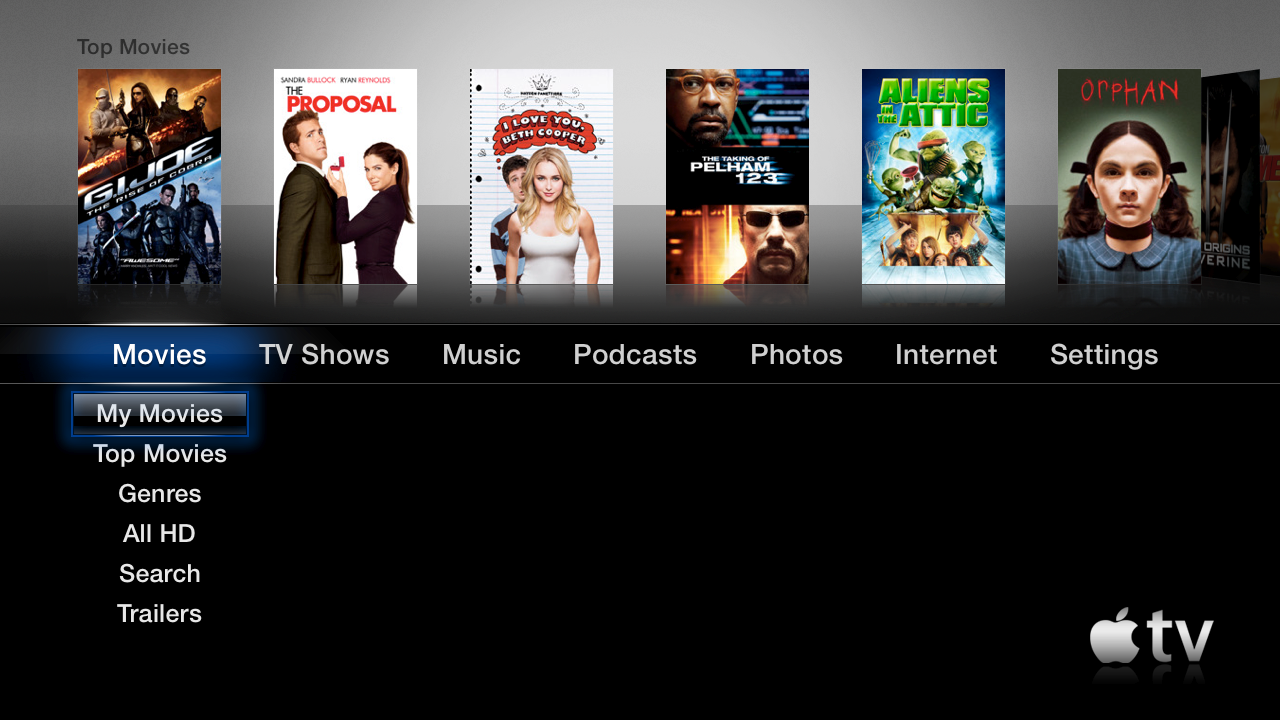 The age of technology has made the Internet accessible for almost anyone on any device. Watching movies and television shows is easier than ever with all of the TV- accessories available. With so many different versions of these streaming devices such as the Apple TV, Roku, Amazon Fire Stick, and the Chrome Cast – it can be difficult to decide which is best for your home entertainment preferences. We sat down with the newest Apple TV to test out its home viewing experience. Apple TV is currently in it’s fourth generation and has evolved in aesthetics over the years. It started out as a silver box with multiple different cable ports.

Now it is a matte black palm-sized box with two cable ports one for the power and one for the HDMI cable. It is sleek and follows suit with the rest of apple’s products as far as aesthetics are concerned. It is an app-driven device that has changed the way we watch television and movies, almost doing away with the need or want for cable. The Apple TV is meant to sit on its side unless you have your television mounted, which in case you can purchase an Apple TV mount. The Apple TV comes with a small remote control (shipped charged) that connects through Bluetooth and acts as your navigation for opening apps, uploading photographs, renting movies and inputting information. The Apple TV remote can also be accessed via an app called Remotes, allowing you to use your Apple iPhone as a remote if you prefer.

Although it’s not perfect, Apple TV’s new tvOS is nonetheless amazing. If you own another Apple device, the Apple TV can obtain your Wi-Fi password and account information from your portable device via Bluetooth, saving you from the laborious process of typing your password and information into the TV…which we all know is kind-of a hassle.

Once the device has your Apple ID, it will pull your photos, movies, and music from your account integrating everything you’ve purchased or saved with your television. This feature alone is probably one of my favorite aspects of using Apple TV and other Apple products together. If you’re familiar with other Apple products, the black screen with large rounded icons showing your app selections is beautiful and intuitive. Apple TV is family friendly. With logical layout and beautiful design, it is also easy to customize the way you wish to view your selections. Netflix, Hulu, YouTube and every other app you can think of is available on Apple TV. However, it is unfortunate that two of my favorite apps are still unavailable on Apple TV; Spotify and Amazon Prime Video. There is a solution… The apps that you won’t find on your Apple TV can be streamed via Air Play from your Smart Phone through the Apple TV and onto your television with no extra cords or wires. This poses a somewhat major problem for people who use Android over Apple. No, having an Android does not mean you can’t choose Apple TV as your way of streaming. However, it is a fact that you won’t get as much value out of your Apple TV if you are an Android user than if you’re a user of other Apple products.

If you have an Android, you are not able to transfer your network or password through your Apple ID during set-up or use your smart phone as a second remote. You also are limited when gaming as you won’t be able to use your phone for any multiplayer games. While it is questionable that these limitations are even enough to persuade people to switch to Apple, in the mean time, having an Android is kind of a bummer with Apple TV.

Another issue with Apple TV video streaming is the inability to play 4K video content. 4K video can display incredible streaming quality and amazing picture. While the majority of new big screen TV’s support some form of 4K video content, it is strange that Apple TV never integrated it. However, Apple TV will evolve as technology does when newer and better content is available. At the rate that 4K video content is emerging, it won’t be long.

EDIT: Apple has released a 4K version of the Apple TV. Check it out here.

Apple TV has games. One thing a lot of people tend to overlook is that Apple TV is also a gaming device. Casual gaming is becoming more popular as people upgrade to smart phones and enjoy a few minutes of Candy Crush or cards while waiting. This approach works surprisingly well on a large screen. Gaming on the Apple TV is a hit – especially now that some games offer multiplayer options. Even for games that are more simplistic though, the Apple TV remote is small and does not lend itself to very diverse or sophisticated game-playing. It is light, and somewhat insufficient when truly experiencing a competitive game that might be found on an Xbox or Playstation. The remote is similar to a joystick while gaming, and the otherwise awesome track pad cannot offer the same range of motion as a real joystick would. If you find yourself gaming a lot on the Apple TV, they make remote control wriststraps that might be a worthwhile investment considering how many Apple remotes get broken being dropped in the midst of a game.

Apple TV has now integrated Siri into the mix. While in the past I have had awkward moments with Siri on my iPhone, causing me to disable the feature altogether, the Apple TV is a bit different. In my opinion, Siri can be overwhelming and less-than-helpful on an iPhone. However, with Apple TV, Siri makes talking to your television both helpful and fun. There’s even a noise canceling mic on the back of the remote so you can be heard through background noise. Siri will even spell out the instructions along the way if you find yourself needing any clarification. You can ask Siri to search for specific movies or TV shows for you and she will draw from Rotten Tomatoes and iTunes user ratings to determine the type of selection that might interest you. In addition to movies and music, you can even ask Siri about the weather, sports teams, stock markets etc. One of my favorite features is being able to ask Siri to rewind or fast-forward a movie – or even pause it. You can of course use Siri for basic functions such as “Open YouTube” and she will do so. Over time, Siri will learn more about you and do some innovative things with her memory.

The new Apple TV does not allow for any storage upgrades, unfortunately. However, it will do a lot of things behind the scenes for you. For example, it will auto-delete your old stuff to make room for the new. However, it’s not for everyone. Android users will be limited in their experiences and the Apple TV is fairly expensive in comparison to the other streaming devices previously mentioned, The 32Gb Apple TV costs $149 and the 64Gb version is $199. You can get the newest Roku 4 for $129 and the Amazon Fire TV by comparison costs only $99 – both in which support 4K video content.

When I went to go buy my Apple TV, I had gotten home and opened the box only to realize that it did not come with an HDMI cable. For the cost of the Apple TV they could have at least thrown in an HDMI cable and maybe a wrist strap.

All in all, the Apple TV is a great purchase. Is it perfect? No. Could there be improvements? Yes. I would highly recommend buying an Apple TV, especially if you’re already an Apple product user.